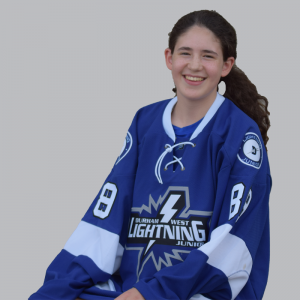 Piper’s hometown is Toronto, Ontario. She started playing hockey at the age of four years old. What she loves most about the game is the feeling she gets when she plays. Every time she arrives at the rink, she is eager to step on the ice and start playing. Despite what is going on in life, hockey has always been an outlet for her to let go and have fun! She enjoys every second she is on the ice; time always seems to fly by. There is nothing better than when she is with her teammates, learning new things from both the coaches and teammates, the competitive atmosphere, and knowing she can continually improve every time she’s on the ice. Piper is described by her coaches and teammates as hard-working, competitive, passionate, and loyal. Piper is inspired by Canadian Women’s National team defencemen Jaime Bourbonnais. She had the opportunity to watch and meet Jaime a few years ago. What inspires Piper is Jaime’s tremendous skill and work ethic. Jamie demonstrates a positive attitude and is fun to be around. Piper aspires to be in a similar position as Jamie one day. Two other people that inspire Piper are her parents. Their belief in Piper and their sacrifices over the years have motivated her to become a better player and person. When Piper is not playing hockey, she enjoys playing other sports like basketball, soccer, and golf. She enjoys anything that gets her active and outside.
Nationality