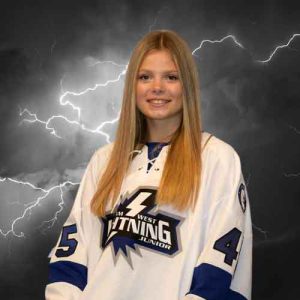 Madison’s hometown is Hampton, Ontario. She started playing ringette at age three and switched to playing hockey at seven. Madison loves how hockey is a team game, but as a goaltender, you still have many chances to shine as an individual. She adores the family and belonging that comes from being on a team. Madison relishes her memories and life lessons and how they have significantly impacted her development. She is proud of the lessons and values she learned while playing high-level hockey.

Madison is athletic, a competitor, outgoing, a leader and mature. Her coaches and teammates describe her as focused, bringing a solid work ethic, having positive energy and seeing her as a technical goaltender.

Madison considers older athletes, especially female athletes, who are or have played, as inspirations. She sees everything they have accomplished and wants to be like them. She also finds that the younger athletes within the game inspire her. She is amazed when they look up to her, just like she looked up to people while learning to play. These younger players push her to work harder so she can be an even bigger role model to them!
When not playing hockey, Madison loves to play with her two dogs. She also loves to hang out with her friends and family, and she like spending time at the beach and cottage!

Madison’s other interests include working with younger goalies, going on road trips to explore new places, reading, and playing lacrosse.

Madison is excited to play for DW Junior Lightning because she is eager to learn as much as possible from the older girls. She looks forward to being in an environment where everyone works hard and wants to win and compete at their highest level. She is excited about the new friendships and memories she will make this coming season.

Madison feels she brings a winning attitude and hard work ethic to the team. She also believes she will contribute a positive attitude on and off the ice.
This season she is looking forward to trying to step out of her comfort zone to improve on old skills and learn new skills. She is excited to have the opportunity to play at the highest level possible for her age.